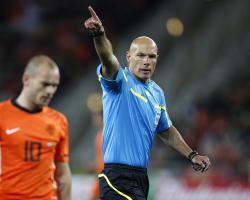 Webb, 43, who retired as a referee last year after a career which included taking charge of the 2010 World Cup final, has been appointed performance director for the Select Group of referees - the 17 full-time professional officials.

He takes over from 69-year-old Keren Barratt, who had been due to retire but is moving into a different role.

Webb, who had been working as technical director for Professional Game Match Officials Limited (PGMOL) since retiring as a referee, will now take responsibility for managing the Select Group.

PGMOL will also appoint an additional referee coach to work directly with Webb.

Webb will continue to report to PGMOL general manager Mike Riley, who said: "Howard's role as technical director this season has enabled him to obtain an excellent understanding of the organisation, our officials and the strong work of our support team

"What has also become clear is that Howard has a natural flair for coaching and his extensive experience of the Premier League means he's expertly placed to lead and further develop the high standards of the Select Group."