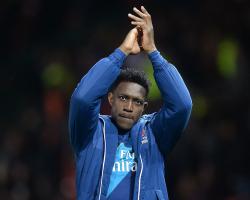 Welbeck sent Arsenal through to an FA Cup semi-final against either Bradford or Reading with a 61st-minute winner that came as a result of a clanger by Manchester United right-back Antonio Valencia.

For United boss Louis van Gaal, watching the man he sold last summer score the winner at Old Trafford must have been hard to take.

But it was also a difficult night for Welbeck, the Longsight lad who came through United's academy and still considers himself to be a big fan of the club.

"Manchester United is a club that means so much to me," said Welbeck, who spent 15 years at United having joined them at eight.

"I was just doing my job.

"It was about being professional, keeping my focus and motivation

I kept plugging away and then got on the end of Antonio Valencia's backpass, beat David de Gea and got the winning goal.

"I'm just really pleased we're through to the next round."

Welbeck's name was cheered by the home and away support when it was read out from the Arsenal team sheet pre-match and he received a largely warm reception when he was substituted in the 74th minute.

"I'll always respect the fans, I had a lovely reception from them and I'm thankful for that," the England forward said.

Arsenal are now favourites to retain the FA Cup after their first victory at Old Trafford in nine years.

They will be big expected to overcome whichever opponent they face in the next round and Welbeck is looking forward to stepping out at Wembley in an Arsenal shirt for the first time.

"It's good for the team that we're through to the next round, and we're in the semi-finals at Wembley," the 24-year-old said.

"To get the goal was good for me but it was all about the team performance."

Arsenal return to Old Trafford in the league on the penultimate weekend of the season.

Although they suffered a crushing home defeat to Monaco in the Champions League recently, their league form has been impressive

Arsene Wenger's men are up to third having won seven of their last eight Premier League games and Nacho Monreal, who scored the first goal in Monday's 2-1 win over United, hopes Arsenal will be able to keep that momentum going until the end of the season.

"We are in a good dynamic in the last few games," the left-back said.

"Except for Monaco when we didn't play really well, in the rest of the games we have played well and won most of them

This is the style now to keep going.

"We are Arsenal and we have very good players

This season we played really well against (Manchester) City, we won and it was fair and this (against United) is the same

We played really well and are very happy for the victory.

"We want to finish as high up as possible and the best way is to keep going in this dynamic, keep focusing in each game and have commitment

We have to win as many games as we can."