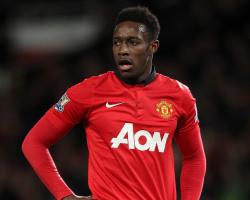 The 23-year-old England international and his team-mates were unable to prevent the club from slipping to a third successive defeat for the first time in almost 13 years when they lost 2-1 at Sunderland in the first leg of their Capital One Cup semi-final tie on Tuesday evening.

That defeat, coupled with their FA Cup third-round exit at the hands of Swansea and the fact they face the Welsh outfit once again in the Barclays Premier League at the weekend trailing leaders Arsenal by 11 points, is a growing cause for concern for manager David Moyes and the reigning champions.

Welbeck said: "Being a Manchester lad and being a United fan, there is extra passion inside me and it does hurt me when I see the team losing. It hurts a lot to see United not winning.

"I can understand why fans are concerned. We are not around the Champions League spots at the moment. We need to get our form back and just win the next matches.

"It was very disappointing to go out of the FA Cup against Swansea and we have to rectify that at Old Trafford on Saturday.

"The manager is very upbeat. He lets the players know he wants to do really well and the players also want to win games for United.

"Losing three on the bounce though is really not good enough and we want to put that right."

United return to familiar territory on Saturday having lost to Tottenham, the Swans and the Black Cats in their last three fixtures, with the former pair becoming the fourth and fifth sides respectively to win at Old Trafford to date this season.

Welbeck knows consistency has been an issue and with a trip to Chelsea to come before they attempt to overturn their first-leg deficit against Sunderland on January 22, that significant improvement is required if they are to rekindle a season which is in danger of fizzling out.

He said: "I cannot pinpoint one reason why this is happening. We were champions last season and we know that the consistency in our game has not been good enough.

"It is a new experience for us all, but the main thing we have to do is look at the next game. Obviously we have to put it right but you can't look too far ahead.

"The next match is the most important. It is Swansea at Old Trafford now and we really have to get three points."

United's troubles have been dissected by the media with fans also taking to social networking sites to express their opinions.

However, Welbeck knows only he and his team-mates can put things right.

He said: "It is up to us all on the pitch and the staff to do it.

"It is not the press or anyone else who are going to change this, it is ourselves.

"It is over 10 years since United lost three games in a row, so we know we have to turn it around and win the next match."