Will Keane could be drafted into Manchester United first-team picture 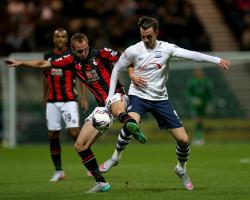 The 22-year-old striker scored two goals in 22 matches for the Championship club, but United manager Louis van Gaal has a shortage of strikers in his squad.

Keane returned to action for United in their Under-21 win over Tottenham on Monday, but could soon be playing first-team football for the club.

"I think that's the idea of him coming back from Preston, that hopefully he'll be involved with the first team more than the Under-21s," United youth coach Tommy Martin said when asked if Keane would be now be pushing for a place in the first-team squad.

After being named United's young player of the year in 2010, Keane made his first-team debut against Blackburn the following season, but has not played for the club since.

The United academy graduate missed the 2012-13 season with a knee-ligament injury and was loaned to Wigan, QPR and Sheffield Wednesday after his rehabilitation.

Another player with his eye on a regular first-team place is Andreas Pereira, who scored twice in the 3-1 win over Spurs at Leigh Sports Village on Monday.

The 20-year-old Brazilian scored against Ipswich on his debut in the Capital One Cup in September, but has only played five more matches since.

The midfielder requested to play for the Under-21s on Monday to earn some game time, Martin revealed.

"He's a young player, he's part of the first-team squad but not always getting the minutes so it's vital that he does play for the Under-21s when he gets the opportunity.

"He needs to play as well as much as possible so that was good for him to play against Tottenham and it's a bonus to get the goals."

Nick Powell, who has played the last three Under-21 games, was left out of the squad on Monday.

The midfielder is expected to leave United on loan this month, but missed the game at Leigh through injury.

Martin said: "He's got a calf strain at the moment."