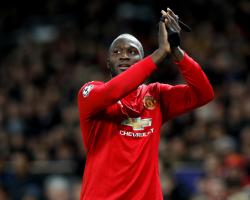 Pogba was sent off at Arsenal for going in late on Hector Bellerin but though United felt it was a harsh decision, they allowed Monday's deadline to pass without contesting the card.

That means their midfield linchpin will miss Sunday's top-of-the-table Manchester derby and instead start the final Champions League group game against CSKA, a match he might otherwise have been excused.

Pogba can help United equal a club record of 40 successive home games without defeat when they take on the Russians but will then miss Premier League assignments against City, Bournemouth and West Brom.

United face CSKA knowing a point guarantees qualification and top spot in Group A but, realistically, only a heavy defeat and an unlikely sequence of events in the game between Basel and Benfica could scupper their chances of reaching the last 16.

It's the next match, the match that matters

"He's very happy to play and try to keep his momentum because since he was back from his injury he's been phenomenal."

''Of course Pogba is a player who is able to do anything on the pitch - it will make things easier for Manchester City and not for us,'' he said

One player not joining Pogba on Tuesday is Zlatan Ibrahimovic, who is being treated with kid gloves ahead of the derby

The striker has made four substitute appearances since his earlier-than-expected return from knee ligament damage, but was absent from the squad when United beat the Gunners.

Mourinho confirmed it was a conditioning issue rather than a fresh injury which kept the striker out at the Emirates and he will give Ibrahimovic every chance of being ready to face City.

"Zlatan is not injured

He will be out again for tomorrow, but I believe he will be back to normal work after CSKA," said Mourinho.

Sergio Romero will start in goal, allowing David De Gea a well-earned rest, and Luke Shaw will be in the matchday squad as he seeks just a third appearance of the campaign.

Victor Lindelof will also be on duty, having belatedly found his feet at Old Trafford following his summer move from Benfica.

The Swedish centre-half had a slow start to his Red Devils career but thanks a supportive dressing room for an improved showing in recent weeks.

"The whole team has been very good since I arrived and helped me in a lot of ways," he said

"The whole team, we always try to help each other

"I speak with the manager and he's been very good for me."