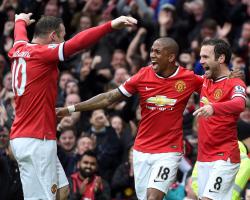 United ended a run of four successive derby defeats at the weekend as they ran out 4-2 winners against Manchester City at Old Trafford.

Once Young had cancelled out Sergio Aguero's opener, United turned on the style and claimed their sixth straight Barclays Premier League victory thanks to goals from Marouane Fellaini, Juan Mata and Chris Smalling.

"We wanted to keep our noisy neighbours quiet, and we quietened them down straight away (after their goal)," the United winger told MUTV.

"As you can imagine the atmosphere in the dressing room was electric (after the game).

"A win in the derby, especially in the way we did it, meant there were fantastic celebrations."

"We feel we can beat anyone on our day," he said

"Confidence has been sky high for a long time and we want to keep the momentum going now."

In all reality, United have hit top form just a bit too late to launch a serious bid for the title.

Even if the Blues lose on Saturday, they know they also have a match in hand to come against bottom side Leicester.

Still, Saturday's encounter will be another chance for United to show they can go toe to toe with the best teams in the league and for one player in particular, it will be an emotional occasion.

Mata will be returning to Stamford Bridge for the first time since he left the west London club for United just over a year ago.

"It's going to be a very special game for me," the Spaniard wrote on his blog.

"Going back to Stamford Bridge for the first time will bring me plenty of good memories.

"The day I arrived to this great club (United) I wrote: 'Gratitude is the memory of the heart'

And I keep thinking the same.

"At that time I had the chance to thank everybody who helped me in London during those two-and-a-half years, and next Saturday it will be nice to meet former team-mates, fans and friends.

Obviously, our intention is to get the three points.

"The best thing is that we get to this game in a very good moment, with confidence, but we are aware that we must perform at our best level if we want to beat Chelsea."