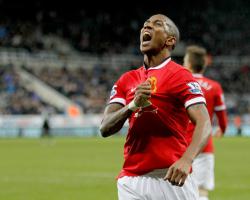 Young was tipped to leave Old Trafford last summer but much to many observers' surprise, he has been one of United's best players this season.

England manager Roy Hodgson, who names his squad for the upcoming games against Lithuania and Italy on Thursday, was in the crowd at Old Trafford on Sunday to watch the midfielder star in United's 3-0 victory over Tottenham.

Young has not played for his country since September 2013, but he remains hopeful of earning his 31st cap in the near future.

"Fingers crossed I can get myself back into the England team," the United winger told Sky Sports News and BBC Sport.

"I've always said that I want to represent my country

It's always an honour to play for England and hopefully I've done enough to get myself back in the squad."

Young's form has sparked rumours he will be offered a new contract.

His current deal expires at the end of next season, but he is not concerning himself with the matter at the moment.

"That's down to the chairman and manager to speak about," he said

"I'm just concentrating on my football.

"I'm not thinking about the length of my contract

I just want to do well in every game that I'm picked to play."

When asked whether he would consider leaving the club, the 29-year-old said: "Of course not

I'm a United player and I've got a year left on my contract."