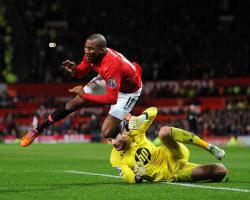 Young landed awkwardly as he leapt over Lloris' flying attempt to win the ball, which Moyes remains convinced should have resulted in a penalty for his team and a red card for the Frenchman.

"Ashley has got an injury that is going to keep him out for a time," said Moyes.

"It is a shoulder injury he received in the challenge by the goalkeeper. I am not sure how long it will be."

Young's absence from Sunday's FA Cup third-round encounter with Swansea further fuels United's annoyance at Lloris getting away with his challenge.

Yet Moyes is not prepared to push for the widening of video technology beyond its current limit of determining whether shots have crossed the line or not.

"I wouldn't go down the route of video technology," said Moyes.

"I trust the referees to make the right decisions.

"They do make the wrong ones at times and I have not changed how I felt on Wednesday. I thought that was the wrong decision."

Moyes offered no further update on the fitness of Robin van Persie, who has missed six games with a thigh injury.

"We will let you know when he is ready," said the Scot.