Young- We must aim for victory 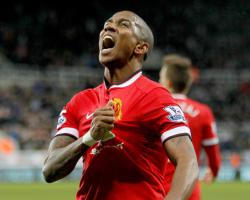 After beating Tottenham last weekend, United have a chance to further strengthen their grip on fourth when they face their old rivals at Anfield.

A draw would be enough to keep United two points ahead of fifth-placed Liverpool, but Young knows victory would put further daylight between the two teams, who both have nine matches left.

"We will go there looking for the three points," the United winger said.

"We are going there to win, you don't go to a place to try and draw

We have got to dust ourselves down in the right way and go for the three points again."

Questions had been raised about Louis van Gaal's team selection and tactics in the wake of United's FA Cup exit to Arsenal, but everything fell into place last weekend as United put on by far their best performance of the season.

Young thinks United will therefore go into Sunday's game in high spirits, but he insists confidence in the camp has never been a problem this season despite a number of uninspiring team displays.

He said: "Morale has always been high

Confidence has always been there too.

"We were obviously disappointed after the Arsenal game

I said afterwards that it will show how our team spirit and character is with how we bounce back.

"I think if you look at the first 45 minutes (against Spurs) then that was exactly the right way to bounce back."

He is undoubtedly one of them

The 29-year-old was expected to leave Old Trafford last summer, but he has been one of the best outfield players in the squad this season.

Marouane Fellaini is another player who seems to be improving under Van Gaal.

Fellaini was heavily criticised during David Moyes' reign, but the big Belgian has earned plaudits for his performances in the no.10 role of late.

"He has been very important for us

He has been in the team and when he is in the box, I'm not sure many teams can handle him," Young said of the ÃÂ£27.5million midfielder.

"You saw (against Tottenham) that he was fantastic at getting in the box and looking like a striker at times.

"I think he likes playing in that position

We just have to utilise his strengths and I think we did that really well on Sunday.

"I think last season was difficult for a lot of people and this season is totally different."