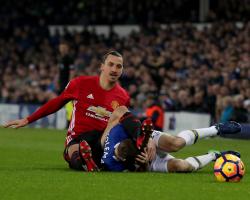 Ibrahimovic tangled with Coleman early in the second half of Sunday's 1-1 draw between the sides at Goodison Park on Sunday.

Referee Michael Oliver did not appear to see the incident, leaving open the possibility of retrospective disciplinary action from the Football Association.

Speaking to MUTV, Ibrahimovic said: "It was a physical game

"I heard one of the commentators say I kicked someone in the head on purpose, but it was a 50-50 duel and he pulled me down.

That is the only thing I have to say."

Everton snatched a point at the death as Leighton Baines scored from the penalty spot after United substitute Marouane Fellaini conceded a penalty, cancelling out a fine lob from Ibrahimovic just before half-time.

"I got a fantastic ball from (Anthony) Martial, and I saw the goalkeeper coming out, so I tried to time it right," Ibrahimovic said of his goal.

"I scored today but it only gave us one point

I would prefer to win and not to score, that is my way of thinking."