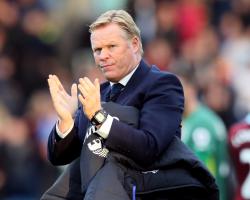 In 2001 Koeman took over as Ajax manager and quickly placed his trust in a 19-year-old Ibrahimovic, who had been marginalised by his predecessor Co Adriaanse.

Together the pair claimed two Eredivisie titles and a KNVB Cup, Koeman's first silverware as a coach and the first of many successes during Ibrahimovic's playing career.

It is a period the Dutchman reflects on fondly ahead of United's trip to Goodison Park, where a 35-year-old Ibrahimovic is expected to lead the line for the Red Devils.

"That time was nice because already in that time you saw a fantastic young player," said Koeman

He was sometimes difficult for the manager but it was really nice, I enjoyed working with him

"He's won titles in Spain, in Italy, in France and, of course, he is in the last part of his career but he is still that motivated player, a strong player who is scoring goals

It's about personality and quality."

Koeman, though, is not surprised that the former Sweden international has not been able to find the net as easily as he did at previous club Paris St Germain

Leading the line for the Ligue 1 powerhouse was almost too simple at times, and by the time he left for United he boasted 156 goals in 180 appearances, including a club record 38 in his final league campaign

Koeman thinks the quality of opposition is higher in England but knows Ibrahimovic, who has netted seven times in the Premier League, could still settle matters if given the opportunity on Sunday

"Maybe some people were a little bit disappointed in the beginning because he struggled maybe a little more than he showed in France but I think that's all about the type of competition," he said

"The quality of defending, the physical strength of a lot of opponents makes it a lot more difficult here

Still, he is one of the best, still making a difference for the team and if he gets chances he still scores goals."

Victory over United would see them replace Jose Mourinho's side in sixth place.