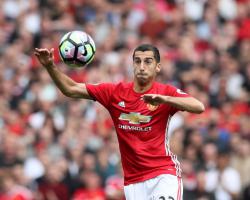 Jose Mourinho cut a frustrated figure in the stands as Manchester United failed to turn supremacy into victory, with Tom Heaton's man-of-the-match display helping Burnley sneak a goalless draw at his former club.

United bounced back from the humiliation at Chelsea with a timely midweek EFL Cup derby win against Manchester City, but hopes of a follow-up victory in the Premier League were thwarted by an in-form academy graduate.

Heaton left United six years ago without a first-team appearance to his name and the 30-year-old returned to haunt United on Saturday, producing a stunning display in the Burnley goal as a pulsating match ended 0-0.

But it is likely as much of the post-match talk will revolve around referee Mark Clattenburg as the Clarets goalkeeper after giving Ander Herrera a harsh-looking second booking having already appeared to send off Mourinho.

The United boss was furious not to be awarded a penalty after a Jon Flanagan challenge on Matteo Darmian late just before half-time, from which he returned in the stands rather than the dugout.

Mourinho's mood is likely to have darkened further as, despite a swathe of attacks, Sean Dyche's side held firm for their first away point of the season.

It was a thoroughly entertaining draw that Antonio Valencia was forced to miss, spending his Saturday afternoon in an operating theatre after sustaining a fractured arm.

Few could have foreseen this match ending goalless when Zlatan Ibrahimovic got away United's first shot after 24 seconds, with Paul Pogba and Juan Mata following up with efforts of their own during a promising opening.

Ibrahimovic volleyed over before an attempt to direct home was denied by Heaton, with stand-in captain Mata seeing an attempt pushed wide.

The chances were not as clear-cut as those United mustered in the final minutes of the opening period, with Ben Mee forced to block after Ibrahimovic got away a shot following a lovely one-two with Pogba.

The pressure did not stop there as Jesse Lingard brought a wonderful one-handed save out of Heaton, who then tipped a fizzing Pogba strike over the bar.

Mourinho was incandescent not to have the chance to face him from the spot as Darmian went down under pressure from Flanagan, introduced minutes earlier following an injury to Stephen Ward.

Such anger is reported to have led the United boss to watching the second half from the stands, hopping around seats near the bench before settling on the directors' box.

As Mourinho got comfortable in his new vantage point Luke Shaw got back superbly to deny Gray and Scott Arfield wasted a glorious chance, but United were now laying siege to Burnley's goal.

Heaton's inspired afternoon continued as Mata was denied a similar goal to Wednesday's against City, before handball appeals against Keane falling on deaf ears as the hosts continued to press.

United, whose manager was passing notes down to the bench, were denied once more in the 61st minute, with Burnley's goalkeeper spreading himself superbly to stop an acrobatic Ibrahimovic strike.

Mata saw a snapshot come back off the post and Ibrahimovic's looping header hit the crossbar, before United's challenge was made all the more difficult.

Herrera, booked in the first half for a challenge on Dean Marney, was given a second yellow for catching the Burnley midfielder again - a harsh-looking decision considering the Spaniard seemed to slip.

Referee Clattenburg was finding himself under scrutiny as tempers frayed, with Ashley Barnes and Darmian claiming penalties at opposite ends, before Marouane Fellaini and Wayne Rooney were introduced.

Barnes came close for Burnley but the Reds kept pushing for a winner, with Pogba seeing an attempt hacked clear before Daley Blind's drive was deflected just over.

Shaw curled just wide and Ibrahimovic just could not get on the end of a far-post cross, with Rooney firing over from a stoppage-time free-kick routine.