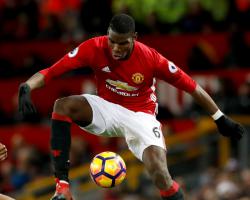 Mkhitaryan fires United to win but leaves on stretcher

Promising displays have not brought with them anywhere near enough points this season, but United brought a frustrating run of four successive home Premier League draws to a timely halt.

Mkhitaryan marked another fine display with an excellent first-half strike against Tottenham, securing a 1-0 victory that the attacking midfielder was unable to celebrate properly after exiting on a stretcher.

It was a disappointing end to an impressive United display, with this victory crucial as they try to catch the top four.

Mkhitaryan, so impressive since fighting his way into the team, was the architect, following-up his maiden United goal in Thursday's Europa League trip to Zorya Luhansk with a fine first-half effort.

Spurs, emboldened by comprehensive back-to-back wins, made life difficult and regularly threatened David de Gea, but there was to be no last-gasp comeback this time.

The match would not end without some disappointment, though, as Mkhitaryan left the pitch on a stretcher following a challenge from Danny Rose.

This was a thoroughly entertaining encounter, ebbing and flowing from the outset as both defended resolutely, pressed smartly and eked out the odd opportunity.

The match could have been so different, though, had Hugo Lloris not reacted brilliantly to prevent France team-mate Paul Pogba ending a team move involving Mkhitaryan and Zlatan Ibrahimovic inside 90 seconds.

Son Heung-min curled over when Spurs managed to rid themselves of United's shackles, with Christian Eriksen forcing De Gea into his first save with a dangerous free-kick that skipped off the surface.

Mkhitaryan was looking dangerous and saw a fizzing shot blocked by Jan Vertonghen, with Phil Jones thwarted from the resulting corner before Ander Herrera's long-range follow-up was dealt with by Lloris.

Michael Carrick tried his own effort from distance as United began to increase the pressure, which Spurs succumbed to in the 29th minute.

A sloppy pass from under-pressure Harry Kane was intercepted by Herrera and the Spain midfielder threaded through Mkhitaryan, who beat the offside trap and then Lloris with a fantastic rising shot.

Mkhitaryan's decision to shoot rather than simply lay-off to Ibrahimovic underlined his growing confidence, but the veteran Swede did not have to wait long for a chance of his own as he forces Lloris into a stop at his near post.

It was far from one-way traffic as the first half came to a close, with De Gea clawing over a fine Son effort, Kane striking wide from distance and Victor Wanyama claiming a penalty after having his shirt tugged by Marcos Rojo.

Spurs continued strongly when play resumed after half-time, with a fine team move ending with De Gea punching away an Eriksen drive.

The United goalkeeper was apoplectic with his team-mates in the 55th minute as Wanyama was allowed to roam free at a set-piece, getting away a close-range header that was inexplicably wasted much to the home side's relief, in particular Antonio Valencia.

The world's most expensive player left Lloris watching on helplessly with a free-kick that rattled the frame of the goal, with the outstanding Spurs goalkeeper impressively denying the midfielder soon after.

Both chances were followed by penalty claims from Herrera, but appeals against Toby Alderweireld and Vertonghen were both ignored to the chagrin of those inside Old Trafford.

Missed chances have cost United dearly in the league this season but Sunday was different.

De Gea did well to keep out another Eriksen free-kick but the hosts ended proceedings on top, with Marcus Rashford's introduction and Mkhitaryan's continued threat causing havoc.

United held on for victory but could now be without the match-winner for a sustained period.

Rose was booked for the challenge that left Mkhitaryan in serious discomfort, leading to his exit from the field on a stretcher

The Armenian was given a standing ovation by the Old Trafford faithful, whereas Marouane Fellaini, who gave away the penalty from which Everton equalised last weekend, was jeered by some when introduced late on.