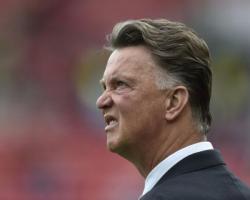 Mourinho looked set for victory in the battle against Louis van Gaal, but deep into injury time Branislav Ivanovic was sent off for fouling Angel di Maria and Van Persie swept home from the resulting free-kick to make the score 1-1.

Mourinho, who was clearly unhappy at Phil Dowd for giving Ivanovic a second yellow card for the foul, left Old Trafford with his unbeaten record in tact.But that will be of little consolation to the Chelsea boss

He will feel his team should have won this match.Many had questioned whether, at 36-years-old, Drogba could fill the huge gap left by the absent Diego Costa, but he had no trouble heading home Cesc Fabregas' corner in the 53rd minute.

It was vintage Drogba, peeling off his marker to glance Cesc Fabregas' corner past David de Gea who, until that point, had made just one save.

But the striker's job was made so much easier by the fact that 5ft 7in defender Rafael was the man marking him.United did not look like getting back into the match

Van Persie and Juan Mata - among others - had wasted good chances to score.And Chelsea looked perfectly organised at the back

But, Van Persie somehow managed to snatch a point for his boss deep into what the home fans used to call Fergie time