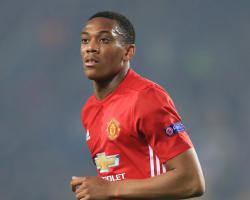 Jose Mourinho was sent to the stands again as Manchester United were held to a 1-1 draw by West Ham at Old Trafford.

The United boss was dismissed for the second time in a month after kicking a water bottle in a furious reaction to a booking for Paul Pogba.

Diafra Sakho put the Hammers ahead after just 90 seconds before Zlatan Ibrahimovic equalised after 21 minutes.

The hosts were the better side for long spells but visiting goalkeeper Darren Randolph was outstanding as United were forced to settle for a fourth successive home draw in the Premier League.

But despite that unwanted statistic - the last time United drew four straight at Old Trafford in the league was in 1980 - it was Mourinho who commanded the headlines after another disciplinary matter.

He has also been involved in a rancorous exchange with Chelsea boss Antonio Conte and been censured for comments about referee Anthony Taylor.

His outburst added spice to a fiery first half that began in dramatic fashion as the visitors took the lead in the second minute.

Dimitri Payet swung in a free-kick from the right and Sakho, making just his second appearance of the season after recovering from a back injury, got ahead of Ibrahimovic to head home.

United responded well to the setback with Pogba firing over and Juan Mata shooting straight at goalkeeper Randolph, who retained his place ahead of Adrian.

As well as building some nice attacks, the hosts also played directly at times and it was from a long ball floated into the box that the equaliser came.

Pogba looked up and picked out the run of Ibrahimovic superbly, with the Swede rising to glance a header past Randolph.

United threatened to take charge but their spell of dominance was interrupted by Mourinho's latest dispute with officialdom.

The United boss took his frustrations out on a bottle and referee Jon Moss took firm action, pointing him away from the bench.

Jesse Lingard also forced a fine save from the keeper on the stroke of half-time.

United sent on Wayne Rooney, one strike short of equalling Sir Bobby Charlton's club goalscoring record of 249, and Henrikh Mkhitaryan in the 65th minute in the hope of regaining momentum.

It worked in terms of possession but West Ham defended strongly

Lingard thought he had put United ahead when he tapped home after Mkhitaryan hit the post 14 minutes from time but the flag was raised for offside.

James Collins gifted an opportunity to Ibrahimovic with a poor back-header but Angelo Ogbonna got across to spare his team-mate's blushes.

West Ham had a late chance to win the game in the dying minutes but David de Gea saved from Ashley Fletcher.