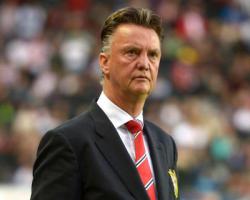 Man Utd 2-1 Everton: Match Report - view commentary, squad, and statistics of the game as it happened.Falcao opens account in victoryRadamel Falcao scored his first goal in English football as Manchester United recorded back-to-back victories for the first time under Louis van Gaal.For most of the match, it looked as though Falcao was anything but a world-class striker as he missed four good chances to find the net, but he finally tucked a top poacher's effort away in the 62nd minute to hand United a valuable 2-1 win over Everton at Old Trafford.United dominated from start to finish and they deservedly took the lead through Di Maria, who curled a tidy finish past Tim Howard in the first half.Everton were allowed back into the game when Luke Shaw lost Steven Naismith and the Scot responded by heading past David de Gea.Despite being second best in every department, Everton will feel they should have taken a point from this game.De Gea kept United in it with two fine late saves from Leon Osman and Bryan Oviedo, and earlier in the game Everton missed a penalty.Leighton Baines, who had scored 14 penalties from 14 attempts before Sunday, saw his spot-kick saved by De Gea after Shaw had clumsily hacked down Tony Hibbert.Van Gaal will face tougher tests after the international break - Everton were ravaged by injuries and clearly tired after a 4,000-mile trip to Krasnodar - but the United boss will be happy to have chalked up his third win, especially as it came without suspended captain Wayne Rooney.The only negative for the Dutchman was that Shaw hobbled off in the second half with an injury.United's play at the start had all the hallmarks of a typical Red Devils performance under former boss Sir Alex Ferguson

The hosts flew at Everton from the first whistle with some high-tempo play that was easy on the eye.Tony Hibbert played just three minutes of Premier League football last year, but an injury to Seamus Coleman meant he was selected for his fourth successive game.The 33-year-old was given a torrid time as Di Maria and Shaw ran riot down the left.Shaw found Falcao with a perfect delivery in the fourth minute, but the Colombian mis-timed his header, which flew wide.Di Maria then created a yard of space on the left wing and sent over another perfect cross, but Robin van Persie blazed over the bar.Kevin Friend issued the first of seven yellow cards when a frustrated Van Persie slid in on Gareth Barry.Falcao wasted a chance in front of goal soon after following a lovely move which included a majestic mid-air flick from Di Maria.Marcos Rojo frayed a few nerves with a couple of risky passes, but otherwise United looked strong at the back thanks to a solid display from 19-year-old Paddy McNair.After applying heavy pressure, United finally broke the deadlock in the 27th minute.Phil Jagielka attempted to hook Rafael's cross clear, but instead it landed at the feet of Juan Mata, who squared to Di Maria and he tucked the ball beyond Tim Howard with a curling right-footed shot.Di Maria would have added a second straight away had Howard not saved his deflected free-kick with a superb diving save.Romelu Lukaku, isolated up front for Everton, took down Baines' long pass on his chest but volleyed wide.Shaw then put United's good first-half work in jeopardy by clumsily bringing Hibbert down in the box from behind.Friend pointed to the spot, but Baines saw his impeccable record vanish before his eyes as De Gea flung his right arm out to push the penalty wide.United continued to press after the restart, but they failed to add to their goal tally immediately.Falcao was the most guilty party

The on-loan Moncao hitman somehow failed to turn in Di Maria's flat ball into the box and he then shinned Shaw's cross wide from eight yards out.Everton then stunned the home crowd with an equaliser.Baines made up for his penalty miss by swinging a deep cross towards Naismith, who powered his header past De Gea after peeling off his marker Shaw.Everton sensed blood and looked for a second

They almost got it when Jagielka headed Aiden McGeady's cross goalwards, but Falcao cleared off the line.Falcao then finally found the net at the other end to put United ahead

The Colombian timed his run inside the box to perfection and prodded in Di Maria's mis-cued shot from close range.United then suffered a blow when Shaw hobbled off with an injury

Tyler Blackett came on in his place and Van Gaal also introduced James Wilson for Falcao, who received a standing ovation for his efforts.Osman broke through the United defence in the final minute, but once again De Gea rescued the hosts with a fine diving save.The Spaniard denied Oviedo with another acrobatic save and the match ended on a bad note for Everton when John Stones was carried off on a stretcher with an injury