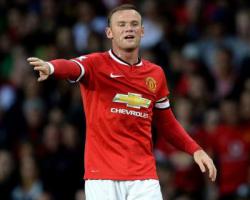 Man Utd 3-1 Newcastle: Match Report - view commentary, squad, and statistics of the game as it happened.Rooney stars as United ease to winWayne Rooney scored twice and set up another goal as Manchester United swatted Newcastle aside with an easy 3-1 win at Old Trafford.Rooney finished a superb team goal to put United ahead and scored again before the break following a lovely through-ball from Juan Mata.The United skipper helped kill off the game by pinging a 35-yard pass to Robin van Persie, who headed past Jak Alnwick, before Papiss Cisse scored a late consolation for the Magpies from the penalty spot.Louis van Gaal's decision to cancel Christmas Day training did not backfire

United were the best team for most of the match.Radamel Falcao had one of his best performances in a United shirt up front while Mata was a constant threat, threading dangerous passes through Newcastle's stretched, unorganised defence.But it was Rooney, playing in a midfield role once again, who stole the show.Some felt Van Gaal's decision to drop Rooney deeper was a mistake, but he has excelled there so far.Against Newcastle he dictated the pace of the game along with Mata and Michael Carrick and the timing of his runs for both goals was superb.It must be said that Newcastle helped ease United's path to victory.The defending for all three goals was sloppy from Alan Pardew's men, who have now lost four matches in a row.United, on the other hand, remain in third position in the Barclays Premier League - 10 points behind leaders Chelsea - thanks to their seventh win in eight matches.After a day off eating Christmas dinner with their families, it took a while for United's players to get going on a chilly Boxing Day afternoon at Old Trafford.Newcastle created the best chances early on

Ayoze Perez beat two United players, but he tried to slip by a third when he should have squared to 17-year-old debutant Adam Armstrong, who had left his marker at the back post.In the 14th minute, Newcastle were unlucky not to be awarded a penalty

Pardew flung his arms in the air and ranted at fourth official Robert Madley after Mata clipped Yoan Gouffran's heels as he entered the box, but referee Michael Jones waved play on.United finally sparked into life when Rooney found Van Persie, with a pin-point pass, but Alnwick raced off his line and forced the Dutchman wide.Not for the first time this season, David de Gea then saved United with an acrobatic dive to deny Daryl Janmaat, who had surged forward from the back.Despite the pressure from Newcastle, the hosts took the lead in the 23rd minute with an impressive team goal.Rooney started the move, laying the ball off to Mata, who chipped towards the back post after the Newcastle defence backed off

Falcao hooked the ball back across the box and Rooney tapped in from close range.Newcastle were rattled

The Stretford End demanded United attack and they did with style.Ashley Young brushed past two defenders and swung the ball over Falcao, but his downward header sneaked wide before Rooney made it 2-0 eight minutes before half-time.Mata again played a key role, sliding the ball through the away defence to the England captain, who tapped in past Alnwick.Van Gaal rose to his feet and punched the air.Eight minutes after the break, the United boss was applauding his team's third goal of the afternoon.Rooney, again given time by Newcastle, looked up and floated a 35-yard pass over the away defence to find Van Persie, who nodded past Alnwick.With the result now beyond doubt, Van Gaal removed Carrick and Falcao for Darren Fletcher and James Wilson.Rooney remained on the pitch, looking for his first United hat-trick since August 2011

The United skipper came very close on the hour when he whipped a 20-yard free-kick just over Alnwick's cross bar.With a game coming up against Tottenham on Sunday, United sensibly took their foot off the accelerator, but Fletcher made a mistake, allowing Ayoze into the box

Again, De Gea came to the rescue with a save at his near post.The Spaniard could do nothing about Newcastle's 87th-minute consolation, though.Phil Jones tripped Jack Colback as he entered the box and Cisse slotted the penalty perfectly into the top right-hand corner.It did not matter, though

The game had been won long ago