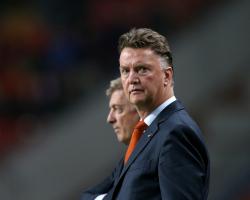 Man Utd 4-0 Norwich: Match Report - view commentary, squad, and statistics of the game as it happened.United give Giggs dream startRyan Giggs gave the Manchester United board food for thought as he enjoyed a dream debut in the home dugout at Old Trafford.Wayne Rooney and Juan Mata both scored twice as Giggs oversaw a comfortable 4-0 win over Norwich.Giggs assumed temporary control of United on Tuesday following the sacking of David Moyes.Although the United board are searching for an experienced successor, Giggs has made no secret of his desire to become full-time manager.And the 40-year-old interim manager did his chances no harm with this display

Once United had put a slightly cumbersome first half behind them, they strolled to victory.And what is more, they did it with the style and panache that has been missing from the men in red for most of the season.There was no sign of the slow, tentative play United exhibited under Moyes

Instead, it was like the 1990s all over again.United played with fluency, width and potency - all components of the Manchester United 'philosophy' Giggs had talked about with so much pride before kick-off.There was a clear attempt to make a break from the Moyes era.The 'Chosen One' banner had gone, Moyes' big summer signing Marouane Fellaini was not even on the bench, and United fans sang the name of their new manager throughout.Giggs was hailed like a Hollywood star throughout the match by the home crowd - many of whom will want the Welshman to take the job ahead of Louis van Gaal, who is the front runner to replace Moyes.The home fans cheered their team on as they emerged from the tunnel for the first time since Moyes' departure.But they reserved their greatest cheer for Giggs, who responded by saluting all four corners of the ground as he confidently strode down the touch line just after his coaches Nicky Butt, Paul Scholes and Phil Neville.The United fans yelled "Attack, attack, attack" immediately after the first whistle, but the players failed to respond initially.What was going on the pitch was something of a sideshow

All the focus was on Giggs, who was the subject of several supportive chants from the stands.When Giggs came off his bench into his technical area for the first time after six minutes, he received the kind of applause especially reserved for club greats.United's record-appearance maker and most decorated player had come to the edge of his box to urge his players to up their game.In truth, for the first 10 minutes there was little difference from the Moyes era.Just after Norwich had a Jonny Howson goal ruled out for a foul in the build up, United had their first chance when Danny Welbeck slammed a powerful half-volley at John Ruddy, who punched the ball away.Old Trafford was quiet

The only noise came from a group of season ticket holders who held up a banner protesting about the singing section which will be introduced in their block next year.Another banner then appeared - this time trailed from a plane overhead

The message read "Thank U Moyes"

Who paid for the plane was unclear.Back on terra firma United were still struggling

Tom Cleverley swung his right leg at the ball and missed.The tempo increased just before the break

Shinji Kagawa turned home Phil Jones' cross, but it was ruled out for offside

Antonio Valencia then belted a low ball at Ruddy which he saved.The increased pressure resulted in United winning a penalty

Steven Whittaker pulled Welbeck back and Rooney drove a low shot past Ruddy.United executive vice-chairman Ed Woodward - the man in charge of finding Moyes' successor - rose to his feet and Old Trafford rocked again.Less than three minutes after the restart, United were 2-0 up thanks to some inept defending from Norwich.Four defenders failed to come out to challenge Rooney, who, despite slipping, curled a right-footed shot past Ruddy and into the net off the far post.Ruddy fumed at his defenders for backing off

Moments later he was at full stretch to deny Welbeck as United upped the pressure.Sir Alex Ferguson and many more United fans got to their feet to clap Welbeck off on the hour as he was replaced by Mata.Three minutes later Mata found the net as he turned home Jones' cross from close-range.Soon after Mata had his second after he nodded home Antonio Valencia's shot from close range.Substitute Javier Hernandez should have made it 5-0 late on.Martin Olsson's deflected shot looped towards goal in injury time, but hit the ball hit the bar instead

Nothing was going to spoil Giggs' special day.The Welshman received a huge standing ovation after the final whistle as he walked off with "Ryan Giggs' Red and White Army" ringing out from all four corners of the ground