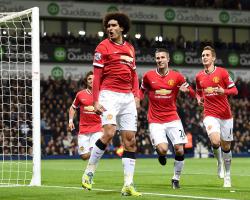 Awesome United sink sorry CityLouis van Gaal's dream turned into reality as Manchester United put four goals past City in a superb derby win at Old Trafford.Sergio Aguero's early opener was cancelled out by Ashley Young's close-range effort and United went in ahead at half-time after Marouane Fellaini's powerful header.Juan Mata added a third after the restart and Chris Smalling also found the net before Aguero pulled one back at the death to make it 4-2.Van Gaal said before the match that he and his players had been "dreaming" of beating their arch rivals for the first time since December 2012.But this was a victory and performance that was surely beyond the United manager's wildest expectations.Once United had levelled the scores, they out-performed the Barclays Premier League champions in every department.Mata rattled City with his creativity and vision, Michael Carrick ensured the hosts played at a high tempo at the base of midfield and Ander Herrera had possibly his best game in United red.But the best players on a pitch full of mega stars were Young and Fellaini

Van Gaal played down his role in United's revival before kick-off, but the Dutchman deserves huge credit for the way he has turned these misfits into two of the most deadly players in the top flight on current form.Pablo Zabaleta, one of the league's most experienced and consistent performers, could not handle Young's pace all afternoon and Fellaini just bullied every player he saw in blue.The result means United remain third in the table, four points ahead of City

The Red Devils are just one point behind Arsenal and eight shy of table-toppers Chelsea.The biggest repercussions are likely to be felt across town

City boss Manuel Pellegrini was taunted with chants of "sacked in the morning" towards the end of the match, which brought to an end a run of four successive derby wins for the Blues.Any hopes of retaining the title are now surely over for Pellegrini and the pressure on the Chilean is continuing to mount