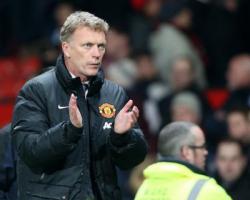 An airborne protest over Old Trafford did not have any effect on the United team as a Wayne Rooney double, a goal from Juan Mata and another from Javier Hernandez lifted the pressure on Moyes.A group of United fans had clubbed together B#840 to pay for a plane to be flown over Old Trafford

The message behind it spelled out their thoughts on the United manger: 'Wrong One - Moyes Out', it read.But if the fans thought it would help turn the tide of public support against Moyes then they were wrong.The home fans inside Old Trafford booed as the plane circled overhead and Moyes' name was sang on several occasions.This was far from a vintage display and United are still huge outsiders for a top-four finish

But at least the margin of victory will provide Moyes and his players with some breathing space.Ashley Westwood gave Villa an early lead but Rooney scored twice - once from the penalty spot - to ease nerves.United turned on the style after the break

Mata bagged his first goal for the club and Hernandez wrapped up the victory in injury time.Moyes received a warm welcome when he emerged from the tunnel and the grateful United manager showed his appreciation by waving to all four corners of the ground.The plane emerged just after the start of the game - and in the 11th minute United were behind.Rafael barged over Christian Benteke on the edge of the box to earn a booking and Westwood responded by sending a dipping free-kick over the wall and beyond a stretching David de Gea.The home fans went silent

The only noise heard inside the ground game from the plane, which was still buzzing around above the stadium and the Villa fans, who proclaimed Moyes as a "football genius".De Gea fluffed a clearance thanks to a poor backpass from Alexander Buttner, almost allowing Benteke to double Villa's lead.Then Rooney took the game by the scruff of the neck, finding space in the box and getting on the end of Shinji Kagawa's pinpoint cross to head past Brad Guzan.The England striker would have a second soon after had it not been for a last-ditch tackle from Ciaran Clark and some impressing defending from Ron Vlaar.United had increased the pressure on the away side, but they still lacked quality and imagination in the final third

Too often it was a case of hit and hope for Moyes men.The game seemed destined for a half-time stalemate before Mata was brought down in the Villa box and Martin Atkinson pointed to the spot.Rooney held his nerve to power the ball to Guzan's left and the home crowd started to relax.Moyes brought on Michael Carrick at half-time for Rafael

The England international slotted in at centre-back, with Phil Jones moving to right-back.Carrick proved his worth at centre-back against West Ham last weekend and he did so again here, sticking his boot in to deny Benteke a milisecond after the Belgian completely missed the ball going for a volley.Benteke missed another glorious chance soon after, heading over from six yards while unmarked.The home supporters began to fear a Villa equaliser but they started to breathe easily again when Mata scored his first goal for the club.Buttner's header found Marouane Fellaini in the Villa box and he clumsily worked the ball to Mata off two away defenders - and the Spaniard stabbed it past Guzan.The sense of relief was clear on Moyes' face

He came to the edge of his technical area and clapped.The fans again showed their support for the manager by singing the Scot's name.Moyes brought off Rooney with next week's game against Bayern Munich in mind

The crowd rose to their feet and clapped the striker off.Benteke conspired to miss yet another sitter, this time shooting wide from close range, again unmarked, before Hernandez made no such mistake in turning home fellow substitute Adnan Januzaj's cross at the end.Moyes was clapped off the pitch and he returned the favour, going out of his way to aim his applause towards the Stretford End after the final whistle